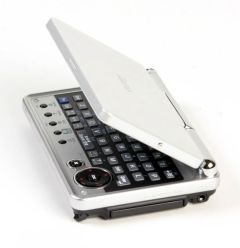 You can read more details of this project (named "weeXpc") on his website.
Posted by Adriatic at 10:25 AM